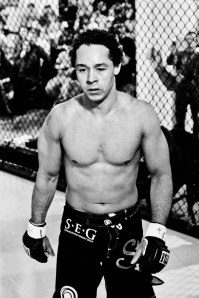 When I first met Marcel Andersen, I was a brand new MMA photographer. In fact, I was so brand new, that I wasn’t even considered an MMA photographer yet. It was my second event ever, and I still wasn’t exactly sure what MMA stood for, and or even what the difference between MMA and UFC was.

It was Marcel’s second MMA fight, and he entered the cage prepared to fight hard and entertain. Marcel walked away with the win that night and continued on to create a winning amateur record that now stands at 5-2.

He also walked away with a brand new, diehard Marcel fan in me.

A versatile fighter, Marcel has won his fights by guillotine choke, arm bar, rear naked choke, and referee stoppage by strikes to his opponent. You never know what you’re going to get with Marcel, and that is what makes him such an exciting fighter to watch.

Marcel is looking to increase his record to 6-2 this weekend at the Valhalla Cagefighting event in Foley, MN. He is facing off against a very talented and worthy opponent, Gary Granholm. Gary is coming off a title fight win over Elliott McLaughlin at Driller Promotions’ “Caged Chaos” event in April. This fight promises to be the type of challenge Marcel craves.

Marcel delivers a kick to the head of opponent John Castaneda — look close and you can see his toes under Castaneda’s chin!

Marcel trains at Spartan Martial Arts under Tom Schmitz, and is working with manager Nick Palmer. The event, Valhalla Rising, is being put on by Valhalla Cagefighting promoter Jim Clark. Marcel is looking forward to being a part of the event’s debut. “Jim is a good guy,” said Marcel. “It is tough team and a great opportunity.”

Marcel has been preparing for this fight with a sense of urgency. “I’m training regularly,” he said. “Lots of Thai pads, drills, sparring and grappling…I have amazing training partners in Cam Gilliam, Kenn Glenn, Chris McAlister, Ryan Pottebaum, Tom Schmitz, Jacob Anderson, Angelo, Chris Dachel…they are an all-star line up!”

Marcel draws his inspiration in the fight world from his desire to win, and from fighters who have preceded him. “I look up to Ken Glenn, Stephan Watt, Mike Richman, Jordan Parsons, Zach Juusola, Chris McAlister and Chris Hansmann,” said Marcel.

Surrounded by these pro fighters in his training camp, and touting a winning record, one wonders when Marcel will go pro himself. “Maybe after this fight,” said Marcel. Encouraged to call another fighter out, Marcel passed on this until he turns pro.

This Saturday night as Marcel adds another fight to his record, he does not intend to let this fight go to decision. “There will be a finish,” Marcel predicted. As only one of Marcel’s fights have gone to decision, this prediction is not a stretch. 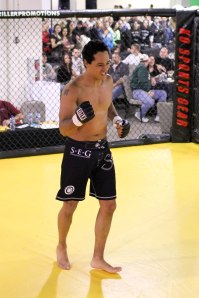 And with the unfaltering support of his teammates, his children Jordan, Daymond, Isaiah and Jamison, he intends to be the one who finishes the fight.

And after this event, what does the future look like for Marcel? “I plan on going to 145 after this fight,” he said. “I wanna do great things…that is all.”

And there is no doubt Marcel is capable of doing great things with his dedication to training, his passion for the sport, his drive to be successful, and the support of those around him.

One thought on “Meet Marcel Andersen”