Meet Pam “Bam” Sorenson, a promising MMA combatant who will step into a cage in Missouri Saturday night to show what Minnesota fighters are all about.

Sorenson, from Blaine, MN, trains out of The Cellar in St. Anthony, MN, and holds a 3-0-1 amateur fight record. On March 22nd she will compete in Kansas City for a women’s Bantamweight MMA tournament. The winner of the tournament will secure a professional contract with BFC.

Sorenson last entered the cage on February 1st in Minnesota in a bout against Christina Jobe. “The fight went very well,” Sorenson said. “Five days before the fight I had pulled a muscle in my side. I was worried, as I knew there were some throws and other techniques I wouldn’t be able to do. But I was able to lock up a guillotine choke in the first round to get the win!” 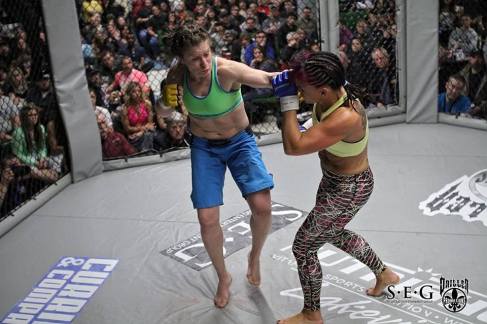 While certainly a satisfying fight for Sorenson, it is not the one that stands out the most in her memory. “My most memorable night in the cage has to be my fight last November in British Colombia,” she said. “I was taken by surprise in the first round. I got hip-tossed, then ground-and-pounded, but I made it out of that round.

“In between rounds, my corner saw the look on my face and said, “This is when you need to decide if this is something you really want to do.” And the answer to that was, “Heck, YES!” Knowing that I hands-down lost the first round, I was able to fight back in the following two rounds, and fight to a draw.”

Sorenson’s dedication to training no doubt helped her come back in that fight. “I believe what separates me from other fighters in my class is my hard work and dedication,” she said. “I train as often as I possibly can — sometimes up to 6+ hours a day, six/seven days a week.”

With four MMA fights under her belt, Sorenson also has some experience with kickboxing bouts. She believes that her various experiences have helped her grow a lot. “I have learned so much from my fights in the past year,” she said.

“I’ve always been more of a long-distance athlete, running and skiing marathons. So after a couple fights, my coaches told me I need to work on being more explosive and higher-paced than I had been. It’s been a struggle, but I’ve been working very hard at it!”

She will get a chance to show how much she’s grown this Saturday night. While Sorenson’s fights don’t always finish the same way, she does have a routine she follows after each bout. “It is something my coach HATES!” she laughed. “I always pack a bag (or two) of Sour Patch watermelons, and hunt them down immediately after getting out of the cage.”

One thing is for sure, Sorenson’s winning record and notable sportsmanship will never leave a sour taste in your mouth. You can keep up with her by following her on Twitter at @PamBam_Sorenson.