McGhee is an amateur fighter from Antigo, WI, who fights out of Seven Clans MMA. His recent fight was the sixth of his career. Known for his keen stand-up, and despite the invitation of his opponent Devin Shepherd to keep the fight there, the finish happened on the ground. “I won my fight in the first round via rear naked choke,” said McGhee. 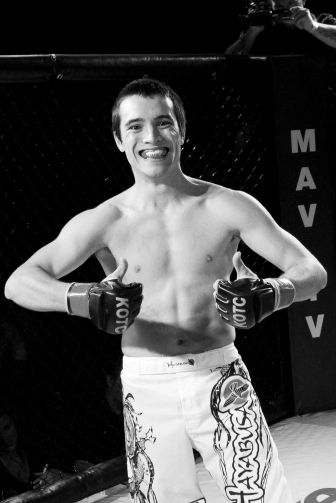 However, there was a lot of action on the feet. “One highlight I remember would be kicking my opponent in the face, and feeling my foot hit,” McGhee said. “Also, while being clenched with him, I was waiting for him to knee me. When he did, I said, ‘there you go!’

“I also remember smiling at him when he hit me, because I enjoy getting hit and see him get angry.”

“Everything went as planned,” said coach Ken Sitsler. “We knew the guy would eventually try to take him down. Nobody stands with Clayton for any longer than they have to.

“My goal was to get Clayton to fight more out of instinct. His ground game looked amazing. He used my favorite trick for taking the back from guard.

“We’ve been working on bellying the guy out more once he is face down. I was shocked at how quick Clayton’s instinct took over. There was no thinking…he just flattened him to the mat and set into a perfect rear naked choke.”

Both McGhee and Sitsler said they felt great at the end of the bout. “The next step for me is to go back to work, train and spend time with my daughter,” McGhee said. “Also, I’d like to spend as much time as I can with my girlfriend and family, especially my dad.”

McGhee’s father is in the final stages of pancreatic cancer. “My dad is sedated in the hospital right now,” said McGhee. “He is lying on his deathbed, even though we tell him he doesn’t have to fight anymore. He is still fighting, as he is dying from pancreatic cancer at age 40.”